Welcome to Marauder Moments - a chronicle of the Mortimer Street Marauders; the games we play, the rules we use, the figures we play with and the scenery they fight over. Hope you enjoy these pages and maybe call back to catch up with our escapades.

5 on 5 General de Brigade bust up!

No posts for a while but plenty of gaming. This is an usual one for us and a formula we will try out again sometime. Read on for more details...

Above and below are some shots of our field of play, 6 x 8 feet with more scenery than normal, yet plenty of space to move about in.

We included a large town and several woods, smaller buildings, areas of rough and a pond. Some areas of high ground, a timber yard and the "Iron Gates"...

"Only five units/ What kind of Marauder Moments lite is this?"

A fine question dear reader. We decided to take any five units as a brigade with the CinC as Brigadier, each unit having it's own leader for local command as well. Limits were as follows;-
Only one cavalry regiment - lights only
Only one battery - medium foot battery only
You may take either the battery or cavalry not both
If you take an elite battalion you must take a militia battalion
If you take a veteran you must have a 2nd class
You may take a redoubt instead of one unit
Simple


I decided on a Bavarian Brigade, a simple one too!

We sketched entry points on maps and gave orders. Troops would move onto the table on turn one.

Orders for the Bavarians were simple, see the above picture; the right hand two were to move to the right of the wood and hold, awaiting further orders, the left hand two move to the left of the wood and also hold. The battery was to move to deploy on the ridgeline and support the brigade with deadly gunnery fire! The skirmishers hold the woods on the left flank. Simple and yet beautiful.

Tony's Russians marched on in four great coated columns with an escorting half regiment of hussars in madder red, lovely! Tony's exact orders remain unknown to me but his intentions were clear;- pin my centre and roll me up with a flanking force of two battalions. 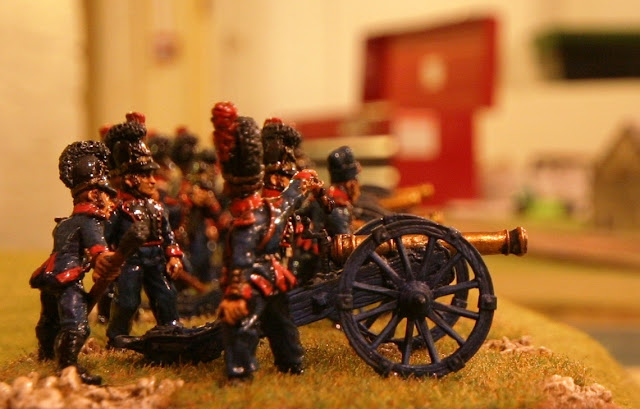 Meanwhile back in the centre the two Russian battalions are shot up by the Bavarians and then charged upon which they break and then run. The Russian hussars retire to cover the retreat. The boys in the woods realise they are chasing shadows and break off too. It's all over.

Well what a fun thing to do! OK so I won, but that aside we passed a very pleasant evening moving pretty toys around a pretty table. We were forced to think slightly differently about our game play which is only a good thing. We began to explore the skirmishers rules a little more which we have rather skimmed over in the past to be honest.

Would we do it again? Yes, for sure. A very pleasant evening was had - and that is what it's all about.

I have a few more write ups to do although some may end up in the gallery section as photos only, who knows. Please feel free to comment and return, best wishes,

We've been wanting do something like this for a while - basically do a photo shoot of one of our armies, possibly more Vanity Fair than ...