Welcome to Marauder Moments - a chronicle of the Mortimer Street Marauders; the games we play, the rules we use, the figures we play with and the scenery they fight over. Hope you enjoy these pages and maybe call back to catch up with our escapades.

This long old post wraps up the Battle of Prestento Perrini.
The action around midday represents the most intensive session of wargaming I can remember playing for along time although it doesn't translate to blog so well possibly!
This report is in two parts; the various sectors at midday and then the inevitable close.

The situation at midday.

Minor engagements in the northern sector

The centre kicks off...

To recap; Prestento has been wrested from French hands by Austrian Grenadiers who are busily building a strong position to hold it. De Bruyere's French brigade is badly mauled; the Poles are moving up to show them how it's done.

The story here is one of Kleist's large infantry brigade being slowly surrounded by up to ten regiments of french cavalry whilst more Poles try to unpick the position.

The following photos rather fail to show the repeated charges and artillery attacks on the hemmed in Austrian masses - most of which are repulsed; the Polish infantry especially receive a bloody nose.

The centre is finally coming to life after both sides dithered during the morning. In essence there is one large Austrian brigade thinly spread across the gap between the twin villages. They are supported by grenadiers and more lately by Cuirassiers too. One regiment ran down the French Old Guard foot batteries while limbered (I know - shameful), these were in turn roughly handle by French Carabiniers and routed towards their sister regiment which is facing off against their French counter parts. The Ffrecnh Guard infantry are creeping forward cautiously mindful of Austrian heavy cavalry in the area. Poor old Gerrard is in retreat and possibly won't be coming back.

Here the stalemate which has persisted since breakfast time was about to be blown apart!

"Nothing to see here Guv". Literally nothing changed; French dragoons pinning Austrian foot while seeing off light cavalry & being slowly whittled down in the interim. 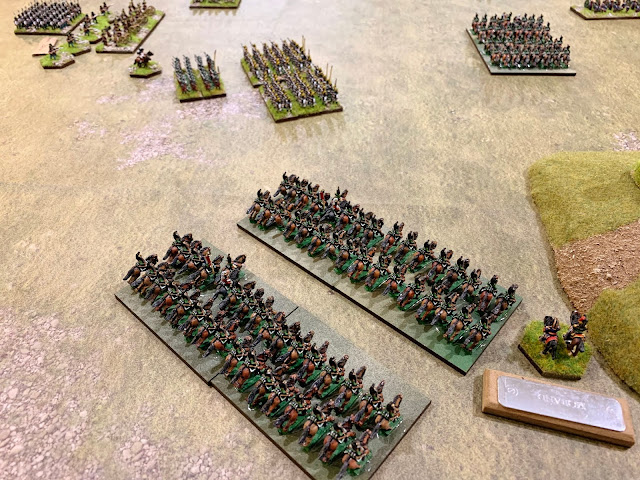 We take a break from the calamitous action to look at toys close up.  You asked for it after all...


At this point, early afternoon, the French began to withdraw their battered remnants from the field.
Losses, especially in infantry were very high indeed. At least the Guard is intact, except the Guard artillery of course... :(
I had lost the battle and with it the French are too short on resources to continue the narrative campaign this season. Time to withdraw to winter quarters.
Arch Duke John has bested Eugene this time.

So what went right and wrong in this game?
For my part, the French, it was a sound thrashing - proper six of the best, trousers down!
Given that this was an objective based game, the twin towns of Prestento & Perrini, my forces barely set foot in them for five minutes before being chased out at bayonet point! Chris & Tony said they felt "on the ropes" a few times which means I had chances which slipped through my fingers or at least it was a balanced game for them too.

The Austrian plan from the outset, namely the "rush" paid off in the long term. Let me explain...
The initial rush south of Prestento by the Austrian light cavalry brigade comprising 2 x 48 uhlans & 48 hussars was designed to prevent the French from attacking Prestento by encircling it while supporting infantry moved up. This was never going to work as planned, Chris even commented that the Austrian infantry brigade & cavalry brigade in the south should have been deployed the other way around. He's right - EXCEPT - Tony's plan worked in the long term. The threat to the Polish brigade of two large regiments of lance armed cavalry with more in support was too great a risk for me to ignore. The advance of the Poles was stalled/pinned whilst Montbrun brought up his Cuirassiers from reserve to deal with the Austrian cavalry. This left De Bruyerre to seize and hold Prestento without support as Von Hammer's far more powerful Austrian brigade in turn supported by two brigades of Grenadiers moved up to evict the French and hold the village until the end of the game. Had the Austrian positions been reversed I would have held Prestento with 13 Battalions and two batteries with Montbrun's heavies still in reserve. This I suggest would have been almost unassailable to the Austrians. At the same time the position of a large brigade of Austrian infantry on the extreme southern flank was perfect for stalling the flank march by 6 regiments of French light horse with attached battery, plus the two regiments of Polish lancers and finally Montbrun's heavies who literally could not break the solid massed ranks of the boys in white. The Austrian cavalry, had they been deployed here, would have been out numbered and out gunned thus letting my flank attack roll down the line making the position to the rear of Prestento untenable which in turn would have strengthened my grip on the village of Prestento. Clever plan Tony, very clever.

Perrini was a slightly different matter. Here Tony, the Austrian C-in-C, launched the advance guard brigades from a forward position straight at Perrini. The village benefited from a hill directly north and a walled farm house beyond that. The proximity of vineyards caused a bottleneck for the Austrians but they were deployed in depth and mostly safely out of sight. The Austrian cavalry couldn't be ignored so valuable supporting fire was directed at them and not at the town itself. My three brigades assigned to assault this position never really made a serious attack and entered into a lengthy firefight which they won for the most part. In time numbers began to tell though as the Austrians wriggled free of the vineyards. The cavalry withdrew making way for more Austrian infantry and finally heavy cavalry brought up from reserve wrecked my position. The Austrian infantry went over to the attack and the French position unraveled.

My infantry losses were horrendous. My cavalry numbers were not made to count being ineffective or reactive. The battle was won by early afternoon. Well played Tony & Chris.

The General d'Armee rules worked magnificently well in managing an awful lot of models by only three players.

Would I do anything differently in scenario design?

I have spent many hours reading historical orbats of real life battles. These differ from how we structure our armies in a way which I feel has an impact on our games. I usually write the scenarios and then leave the generals to create an army from the toys available, we know enough about Napoleonic armies to get this mostly right. The GdA rules put a limit of 8 units in a brigade and have no divisional level and I can see why. Real armies do have divisions and historical norms for brigade sizes which have an impact on battles in two areas; firstly brigade structure and secondly on deployment especially of reserves.

The limit of 8 units in a brigade is an upper limit not a target! I would like to see more brigades of 4 - 5 battalions (plus battery & skirmish screen) with cavalry in either two or three regiment brigades plus horse battery if needed. This is more in keeping with my reading of correct compositions and also means that brigades occupy less space and cannot be spread over an unrealistically huge area exerting a disproportionate board control whilst being in real terms impossible to command.

By considering the Divisional aspect, even if not depicting a Divisional command level, we see that most/some troop types were deployed as a division not by brigades spread about liberally. An obvious example of this is my deployment of heavy cavalry reserves and the Old Guard cavalry in this game. I suspect that two brigades of heavy cavalry would have been deployed as a Division whilst operating tactically as brigades; mine were split up at deployment giving me easy options and too much flexibility. My deployment of the Guard Cavalry was the same. I got this concept spot on with the Poles; two infantry brigades each of four battalions with the divisional battery attached to one of them; the attached light cavalry brigade of two regiments operating in support. This forms a tasty formation, self supporting, flexible and just looks and feels "right". (Because it is!). In fairness the Austrians deployed with this concept in evidence if not in mind. The two brigades of Grenadiers were side by side as were the two brigades of reserve heavy cavalry - funnily enough it worked famously. Clearly there can be exceptions but I think it's sensible to think about this in future games especially at army creation and at deployment.

Many thanks to Tony & Chris for a famously memorable game and to you guys for reading and commenting - it is so much appreciated by we three. There are more toys on the way and more planned for 2020. However this will be our last Napoleonic game of 2019, we'll tinker with some smaller projects and then launch a bigger game in January. I have a few more ideas for posts this year and if you haven't already entered the silly caption competition do so - free goodies must be won!

Posted by warpaintjj at Thursday, November 28, 2019

We've been wanting do something like this for a while - basically do a photo shoot of one of our armies, possibly more Vanity Fair than ...